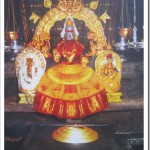 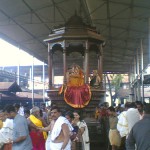 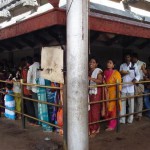 India, as you all know, is the home of Tantra

I have just returned from a 2 week stay in Kollur, Karnataka, India. Kollur is the home of the well-known Mookambika Temple which is among the seven most sacred temples in the state of Karnataka.

It is said that the image of Goddess Mookambika was installed here by the great Sri Adi Shankara, the revered Hindu saint, who performed years of penance in the area. It is believed that Adi Shankara perceived the idea of having a Mookambika Devi temple at Kollur and himself installed the statue of the deity in the temple some 1200 years ago. It is also said that the Shiva Lingam in front of the goddess, materialised miraculously on its own.

Mookambika is regarded as a manifestation of Shakti, Saraswathi and Mahalakshmi. In fact, she symbolises the Supreme Truth or Transcendental Supreme Reality.

In the top middle photo, you can see the statue of Goddess Mookambika being paraded around the temple, in a special golden chariot, carried by dozens of temple priests. as well as the individuals who have paid for the event. They usually run as fast as they can, with bells clanging, crowds cheering , and it is a very colourful, festive noisy affair and occurs several times each day.

For those of you who think this is all rather culturally alien and find it hard to relate to,

Below is a quote from the great genius of modern science, Albert Einstein:

“the most beautiful and the most profound emotion we can experience is the sensation of the mystical. It is the source of all true art and science. He to whom this emotion is a sranger, who can no longer pause to wonder and stand rapt in awe, is as good as dead; his mind and eyes are closed. The insight into the mystery of life, coupled though it may be with fear, has also given rise to religion. To know what is impenetrable to us really exists, manifesting itself as the highest wisdom and most radiant beauty which our dull faculties can comprehend only in their most primitive forms, this knowledge, this feeling is at the centre of true religiousness.” Albert Einstein