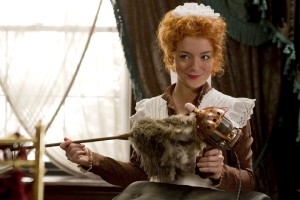 A tantric massage client phoned me a few days ago to tell me about the movie ‘Hysteria.’

I must confess that I haven’t seen the film myself yet,  but what interested me in the conversation with our client was that he pointed out how very respectable it was for a woman to go to a doctor in Victorian times, and to receive ‘manual digital relief’ in order to produce a ‘paroxysm of relief.’

The film’s director, Tanya Wexler, says:’ They didn’t consider the treatment sexual, because the husband was not involved. They thought the orgasm, or paroxysm as they called it, was purely involuntary….. There is something about that time in the 1880’s, and just how strict the cultural codes were, that makes it funny…… everyone pretended it was a medical thing, not a sexual thing, and they really believed it.’

The practice of stimulation had been going on in doctors’ consulting rooms since at least 1653, with a midwife sometimes called in to help. Early machines were designed to help doctors who felt unable to complete the task manually.

Yet when a man goes to receive a sensual massage or a tantric massage today, in 2012,  he still often feels that he has to go secretly. Unfortunately  there is still  stigma in society about receiving any kind of  ‘sensual’ service, and it is definitely still not considered ‘respectable’ by the majority of society. The ‘therapeutic’ aspect has still not been truly understood or accepted. And naturally there will always be one set of ideas for women and a very different set for men.

4 Responses to “The movie ‘Hysteria’”