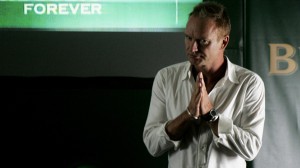 Some of you may have read my original post on Sting, written on March 27th on this blog:

Today, I discovered a new article on Sting’s views on women, which I find very interesting –  Sting practices tantra yoga and recognises that women are  superior to men in many ways!!

Here is the article:

Sting wishes he could live as a ‘sex slave’ in a world run by women.

The musician – who is married to film producer Trudie Styler and is famous for practicing Tantric sex – said “I’ll say the standard misogynist thing, I dont like women drivers very much, but I prefer to live in a world run by women. I just take my hat off to a superior form. I’m very comfortable with the idea of women being superior in many different fields. The way they navigate the world is something I admire. All this striving for machismo power, its f***ed up. We’d be better off if it was run as a family. I’d be happy being a sex slave in that kind of society and write the odd song.”

Although he fantasises about being a sex slave for powerful women, Sting – real name Gordon Sumner – insists he is still very much ‘in love’ with his wife, who he has been in a relationship with for almost 30 years and with whom he has four children .

He explained: “We’ve been together 30 years and luckily we’ve evolved in a compatible way. We’re both different to what we were. I want that to continue and pray every day that it does. She might get sick of me. If she sees more of me she gets sick of me. I dont’t (get sick of her). I love her. She’s great.”

Personally, I think Sting should be commended for  discussing his views and experience of  his tantric practices in public. He  has greatly contributed to a wider understanding and acceptance  of the subject.