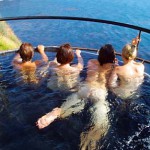 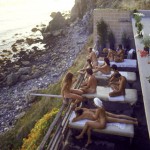 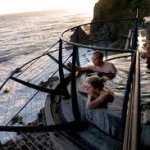 
How did I learn to deal with my anger? I went to California

Esalen, in northern California, was founded in 1962, and became a centre for the ‘human potential’ movement…It was an institute devoted to the exploration of the world of ‘unrealized capacities that lies beyond the imagination.’ It became known for its experimental workshops, the steady influx of philosophers, psychologists, artists and spiritual thinkers, as well as its breathtaking grounds, blessed with natural hotsprings.  The photos above show visitors receiving the renowned naked Esalen massages in the open air and lying in the  hot tubs which are so popular there, and all over  California.

I went to live in California in the 1970’s and became involved in the human potential movement and the psychological experimentation which was so popular at the time. I would go to workshops and bang pillows , raging at my parents, and trying to let out all my anger…….but little by little, I realised that the more I screamed, the more angry I was becoming, and the theory that if only I screamed long and hard enough, all my bottled up anger would disappear, did not seem to stand the test of experience.

Gradually, it began to make more sense to experience anger as something to be transcended, through deeper understanding of its roots.

I received the following story today from a friend. I think it helps one to deal with anger, and to understand the roots of anger, in a far deeper, more subtle and beautiful way……

A Holy saint who was visiting a river to  bathe,  found a group of family members on the banks, shouting in anger at each other. He turned to his disciples and asked:

‘Why do people in anger shout at each other ?’

The disciples thought for a while, and one of them said: ‘Because we lose our calm, we shout.’

‘But why should you shout when the other person is just next to you?You can just as well tell him what you have to say in a soft manner’ asked the saint.

Disciples gave some other answers but none satisfied the other disciples.

What happens when two people fall in love? They dont shout at each other, but talk softly, because their hearts are very close. The distance between them is either non-existent or very small…’

He looked at his disciples and said:’ So when you argue, do not let your hearts get distant. Do not say words that distance each other even more. Or else there will come a day when the distance is so great that you will not find the path to return.’