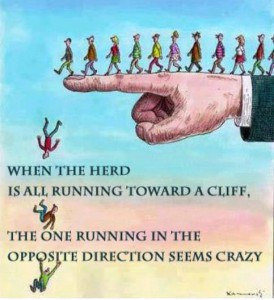 ‘A Search In Secret India’ by Paul Brunton – excerpts

Paul Brunton  (1898-1981) was a British philosopher, mystic and traveller.
His ‘Search in Secret India’ and the other books he wrote, had a major influence on the spread of Eastern yoga and mysticism to the West.
Here he is putting questions to Ramana Maharshi:

“You mean that it is perfectly possible to conduct such mental investigation into oneself?”

“Assuredly! It is possible to go inwards until the last thought ‘I ‘ gradually vanishes.”

What is left?” I query. “Will a man then become quite unconscious, or will he become an idiot?”

“Not so! On the contrary, he will attain that consciousness which is immortal, and he will become truly wise, when he has awakened to his true self, which is the real nature of man.”

“But surely the sense of ‘ I’ must also pertain to that?” I persist.

“The sense of ‘ I’ pertains to the person, the body and brain,”
replies the Maharishee calmly.


” When a man knows his true self for the first time, something else arises from the depths of his being and takes possession of him. That something is behind the mind; it is infinite, divine, eternal. Some people call it the kingdom of heaven, others call it the soul, still others name it Nirvana, and we Hindus call it Liberation; you may give it what name you wish. When this happens a man has not really lost himself; rather, he has found himself.”

As the last word falls from the interpreter’s lips, there flashes across my mind those memorable words which were uttered by a wandering Teacher in Galilee, words which have puzzled so many good persons:

How strangely similar are the two sentences! Yet the Indian sage has arrived at the thought in his own non-Christian way, through a psychological path which seems exceedingly difficult and appears unfamiliar.The Maharishee speaks again, his words breaking into my thoughts.

“Unless and until a man embarks upon this quest of the true self, doubt and uncertainty will follow his footsteps throughout life. The greatest kings and statesmen try to rule others, when in their heart of hearts they know that they cannot rule themselves. Yet the greatest power is at the command of the man who has penetrated to his inmost depth. There are men of giant intellects who spend their lives gathering knowledge about many things. Ask these men if they have solved the mystery of man, if they have conquered themselves, and they will hang their heads in shame. What is the use of knowing about everything else when you do not yet know who you are? Men avoid this enquiry into the true self, but what else is there so worthy to be undertaken?”