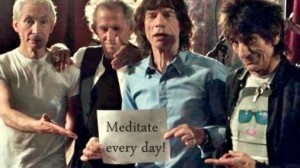 The Rolling Stones may recommend it , but what is meditation?

There is a lot of talk about meditation nowadays, but how many people really know what it is?

Our world has become one of ‘instant gurus’. People do a course here and there, and then set themselves up as experts.

They then teach courses themselves, charge a lot of money and delude everyone else as well as themselves.

It is all too easy to copy or repeat a few paragraphs from a book or website, without any real understanding of what is being said.

People want quick results and dont want to put in the time for real practice and deeper experience. They like to concoct their own philosophies.

However, there is another side

and a lot of precious information is also available.

Generally speaking, it is advisable to turn to the teachings of the great Masters who have spent many years in meditation, and who teach from their own personal experience and realisation.

He did not teach meditation as such, but suggested that we look within and discover for ourselves ‘who am I’.

People’s minds would naturally quieten down in the presence of the stillness which surrounded him.

He talked very little but gave hints to individual questioners who came to visit him and who wanted to understand the true nature of the mind. Those hints were written down, translated, transcribed and included in the published books about his life and teachings.

‘Turning the mind inward is done by practice and dispassion and that succeeds only gradually.

The mind, having been so long a cow accustomed to graze stealthily on others’ estates, is not easily confined to her stall. However much her keeper tempts her with luscious grass and fine fodder, she refuses the first time; then she takes a bit; but her innate tendency to stray away asserts itself; and she slips away; on being repeatedly tempted by the owner, she accustoms herself to the stall; finally even if let loose she would not stray away.

Similarly with the mind. If once it finds its inner happiness it will not wander outward.’