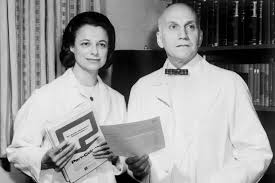 Have any of you been watching Masters of Sex on tv – channel 4?

4 out of 12 episodes have already been shown. Plenty of time to describe some of the interesting work of this couple who are now known as two pioneering researchers of human sexuality. The series is based on a biography by Thomas Maier, and we have already been given a hint of the disturbed life of Masters’ early years when he was beaten by his father, with his mother just choosing to ignore what was going on.

In the tv programme, Masters is played by Martin Sheen (photo above left) and the photo on the right is of the real Masters, whose repression shows in his eyes and face. And yet, this is the man who fought to break convention and chose to devote his life to chronicling and measuring the sexual habits of the men and women of his time.

Masters,  and Virginia Johnson, who started off as his research assistant,  became partners and recruited volunteers to shed their inhibitions and masturbate or have sex in laboratory conditions. They later wrote and published ‘Human Sexual Response’ in 1966, a book which was intended mainly for the medical profession, but which became a huge best-seller. It was based on the analysis of approximately 10,000 orgasms, and was notoriously described as ‘the book that taught America how to love.’ The book shattered myths about the female orgasm.The couple married in 1971, after Masters had divorced his first wife. They stayed together for 21 years, having sex with electrodes on and without. However, Masters appears to have struggled with intimacy and was a mystery to himself. Like many men, he found it difficult to express love.

Today we are flooded with information and how-to manuals, but when Masters and Johnson began their ground-breaking research in the 1950’s, America  was a prudish place, full of misconceptions. However, in many ways, we remain as clueless about love as in the 50’s The sexual revolution they helped to create had a profound impact – but in their personal lives, Masters and Johnson kept searching for love with great difficulty.

Today the same elusiveness about love exists in our modern ‘hook-up’ culture. People understand about the mechanics of sex and our society is saturated with it. But sexual dysfunction is still a problem, and according to experts, many men still struggle with intimacy and empathy and a respect for the common humanity of their sex partners.

Later in their career, Masters and johnson underlined that knowledge of carnal functions cannot replace the wisdom of the heart. This is something which is even more of an issue today. We may know all about the mechanics of sex, but the elusive search for love is as strong as ever. I read recently in Tme-Out, that there is now a new app called Spreadsheets, that monitors the total number of thrusts, duration and decibel peaks during sex. But is there such a thing as too much information – and isn’t this adding to the mechanical nature of our lives in general, today?

It seems to me that what we need today is a love revolution. The sexual revolution is over.