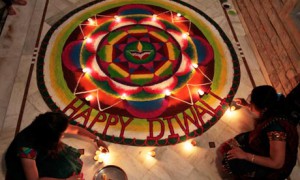 Diwali, the festival of lights

is celebrated by Hindus, Jains and Sikhs (on 24-28 October this year – dates vary according to the Indian lunar calendar) has become increasingly popular and mainstream in the UK.
India loves its holy holidays, and during Diwali, which coincides with the Hindu New Year, a lot of time is spent on decorations, fireworks, food and also wearing new clothes on the day which represents the triumph of good over evil.

Depending on who you talk to, the significance of the day may be explained in different ways. The great sage Ramana Maharshi said that Diwali signifies the shining of our true Self, after the destruction, through self-enquiry, of the Ego, with which we tend to identify. Due to our latent tendencies, we see the world in a certain way, and this becomes habitual. But when we practice self-enquiry, we eventually discover that our inner Self was always there, shining and bright, and that is our true nature.

The Bhagavad Gita says ‘the light among lights……. said to be beyond darkness and called God by some, is the embodiment of knowledge, worthy of being known….. and dwells in the hearts of all.’

One of the most popular stories told is the legend of Lord Rama and his wife Sita, returning to their kingdom in northern India from exile after defeating the demon king Ravanna in the 15th century BC.

Around one month before the festival starts, women get together and start preparing Diwali snacks. It is an activity which brings all the generations together and is filled with joy and activity. I am always impressed at the creativity and joy with which Indian women express their art, preparing vast amounts of beautiful and delicious dishes.

We wish all our clients a very happy, joyous, peaceful and prosperous Diwali.