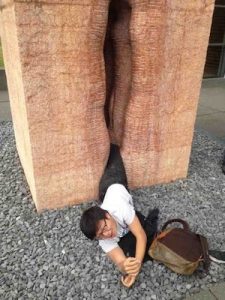 US student is rescued from giant vagina sculpture in Germany

You may have read about how a young American in Tubingen, Germany got trapped inside a giant sculpture of a vagina and  had to be rescued by 22 firefighters  -The statue, Chacán-Pi (Making Love), is the work of Peruvian artist Fernando de la Jara and has sat outside of Tübingen University’s institute for microbiology and virology since 2001. It’s valued at $173,000.

I just had to mention it on here, because it made me laugh so much !

Police confirmed that the firefighters-turned-midwives delivered the student ‘by hand and without the application of tools.’

“We were able to pull the victim out with our bare hands after about 30 minutes,” said the rescue chief, who could not help but add that a “forceps delivery was not necessary.” The town’s mayor told a local paper that he could not imagine how the boy got caught, “even when considering the most extreme adolescent fantasies,” adding, “To reward such a masterly achievement with the use of 22 firefighters almost pains my soul.”

‘It was a dare’ said the squad leader of the local fire department. ‘The young man had tried to pose for an unusual photo and climbed into the artwork.’  He could not climb out alone.