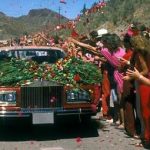 Have you seen ‘Wild Wild Country’ – the Netflix 6-part documentary?

I strongly recommend that you watch it because it is fascinating entertainment.

It tells the story of the community of followers of the controversial Indian guru, Bhagwan Shree Rajneesh, (later called Osho – he of the 99 Rolls Royces) who I have mentioned in several articles on this website, specifically here and here and  here , because his followers were really the original creators of tantric massage.

Rajneesh began giving talks on sex and spirituality in India in the 1960’s. Many young, educated and often affluent westerners were attracted to his teachings and he became well-known in the west in the 1970’s.
By 1981, his followers had  outgrown their ashram in Pune, India and had become very unpopular there. So they decided to set themselves up elsewhere and bought a stretch of approximately 64,000 acres of farmland – Big Muddy Ranch,  in rural Oregon, USA – in a tiny town of less than 60 conservative retirees,  called Antelope.

The Directors of Wild Wild Country have managed to obtain 250+ hours of footage and extensive new interviews of both ex-Rajneeshees and the  conservative Oregonians who lived there. So we have access to both sides of the crazy story of this episode in the life of Rajneesh and his followers, which made national headlines in the USA in the 1980’s and really forms a part of American cultural history.

I was living in California at the time and got daily reports of the bizarre goings-on in Oregon.

Rajneesh took a vow of silence when he arrived in Antelope, and so could claim that he was not aware of what was being done in his name.

His followers built a fully-functioning city that included rows of homes, a massive assembly hall, a pizza parlor, a dam and a private airstrip.

But the construction of this self-made paradise proved to be just the beginning, as they clashed with the Oregonians who saw their size and growing influence as a threat.

They arrived in peace, but Rajneesh had given full control to his main secretary, Sheila, who was a very unattractive and manipulative character. Under her ‘leadership’ they embarked on a series of underhand and criminal activities. They accumulated a huge arsenal of guns, got involved in biochemical warfare, assassination attempts,  intentionally contaminating salad bars with salmonella, electoral chaos and much more besides.

When it became clear that the US government were about to take drastic steps against them, Rajneesh tried to escape on his lear jet, but was  detained by the US authorities and later deported. He tried to land in several different countries but was denied entry by 21 countries and had to return to India. He died in Pune in 1990. Before his death, he had told his followers to refer to him simply as ‘Osho’.

Several of his followers served prison sentences and in the ‘90’s, two British followers of Rajneesh were convicted for conspiring to murder a US attorney general in retaliation for his investigation of the group.

Today, very few of the new, mainly young, visitors to Osho centers know the truth of what went on during his lifetime. His name has been changed from Rajneesh to Osho and a lot of the facts have been whitewashed. The ashram today is known as the ‘Osho International Meditation Resort’

Rajneesh was a former philosophy professor and a prolific and gifted writer. His books live on, and it seems that he attracts even more followers today than during his very controversial lifetime.
I strongly recommend you watch the documentary. The first episode is a little slow, and the interviews with Sheila are very irritating, but don’t be put off, the rest is hugely entertaining. Here is a link to the trailer.

PS. Since writing this article, I have discovered that the documentary has become so popular and received such  glowing endorsements from review sites and film producers, and there has been so much excitement about the footage unearthed by the directors  with journalists contacting living leaders of the group etc, that there are even plans to make a hollywood movie about Rajneesh/Osho.